Eat Your Heart Out Stephen King (Not Literally, Though)

When I was thirteen years old, I received a peculiar Christmas gift from a cousin who was a few years older than me. Holding the wrapped gift in my hand, I could clearly tell that it was a paperback book, but I never knew this cousin as much of a reader, so I was intrigued to pull back the wrapping paper and find out what exactly he thought I would enjoy.

Well, it turns out he started me on a journey that hast lasted nearly 25 years. Beneath the wrapping paper veneer was a perplexing mixture of words and images. Immediately, my eyes were drawn to the name of the author--one that I had heard bandied about, oftentimes accompanied by a grunt or a sneer.

Okay, I knew who this guy was, and I was aware that he was a very popular horror author. I peered over at my parents, afraid of their reaction to such a brazen gift to an impressionable eighth grader. Surprisingly, they didn't seem to mind.

But what caught  my eye more than the verboten name on the cover was the picture of some sort of Clint-Eastwood-looking cowboy on the front. I clearly remember thinking to myself, I thought Stephen King wrote horror books, not westerns. 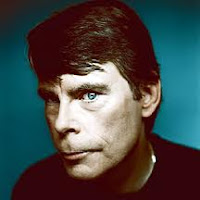 For those of you "in the know," you have no doubt guessed that the book was the first installment in King's magnum opus, The Dark Tower Series. With some trepidation, I started reading The Gunslinger, and found myself drawn into a fantastic parallel world of anachronisms--a dystopian society mixed with robots, wizards, and medieval hierarchies that had fallen by the wayside.

And thus began my literary love affair with Stephen King, and the horror genre in general.

I love a scary movie. Actually, let me qualify that a bit. I love a traditional horror movie. No, I can't stand these torture flicks that have been en vogue over the past few years (like Hostel, The Human Centipede, stuff like that). In fact, I would say I'm a bit terrified of anyone who would tell me they actually enjoy movies like that with a straight face. Those people are probably going to end up on the news someday amidst comments like, "I can't believe it; he was such a quiet neighbor." But, movies like Paranormal Activity, The Shining (the original one), and The Exorcist? Classics! All of them.

Over the years, I allowed myself to branch out a bit from Stephen King and try other authors that wrote in the horror genre. Some I liked. Most I didn't. I was kind of a one-author-guy during my formative years.

But then, a few years ago, I discovered F. Paul Wilson, and a brand new love affair began. I feasted on characters like Rasalom, Glaeken, and Repairman Jack. The writing was tight, tense, and the stories moved with lightning-fast pacing. And aside from the obvious supernatural elements, many of the "horrors" encountered in the Repairman Jack series had many very realistic aspects to them.

I mean, Stephen King's It is one of my favorite books of all time, but is there a chance that a demonic, Bozo-looking clown is going to lure me into a sewer drain and feast on my soul (and various body parts)? Probably not. With F. Paul Wilson, many of the perils that Repairman Jack faced could actually happen.

That stuff was really scary.

Now, obviously, my understanding of the world has changed significantly over the last twenty-plus years. Crazy spider-like monsters? Not real. Monstrous human beings that can carry out horrific attacks killing thousands in a split-second? Very real. A parallel world with a nefarious creature known as The Crimson King? Fantasy. Human trafficking? Terrifyingly real.

I had come to realize that the world was full of monsters. Maybe not the kind that Lovecraft created in his fiction, but definitely the kind that could murder children, rape women, and commit genocide.

Those monsters live in our world.

And then there's the monsters that live in our hearts...

I wrote a short novel. When I originally started writing it, I meant for it to be a cautionary tale centering on a man with so much hubris that he would rather watch his entire world implode than own up to his shortcomings. It was partially based on me, although so heavily fictionalized that only tiny shreds of my personal history exist within the plot line.

Then I released it, and I came upon a startling realization.

As people began to provide me with their reactions to the story, I became increasingly aware that what I had written was actually a horror story. One person told me the story literally made him sick to his stomach. Another told me that it stuck with her for days (and perhaps even weeks) after reading it.

So what is it about The Perdition of Zephyr Hopkins that has made people shudder?

Blood and gore? Nope. The worst injury that the main character sustains in a cracked rib.

Demons and monsters from the netherworld? Not at all. The only monster in the story is a man named Zephyr Hopkins who faced circumstances that would make any of us cringe and cower in fear. His string of poor choices perhaps cause us to wince even more.

No, Zephyr Hopkins is a tragic character. The monster of deception that dwells in his mind concocts a tenuous illusion that threatens to collapse at even the slightest disturbance. It is this tension, I believe, that makes The Perdition of Zephyr Hopkins something a bit more "genre-y" than most of my literary fiction.

I'm not a horror author. I've never aspired to be. Stephen King and F. Paul Wilson can rest assured that they will not have any competition from me (on many levels).

But it seems by exploring the darker side of the human condition, I can write a pretty horrifying story all the same.


Buy The Perdition of Zephyr Hopkins now for $0.99 at: