Excerpt from The Perdition of Zephyr Hopkins

Here is a short excerpt of The Perdition of Zephyr Hopkins. It is now available at the following eBook retailers for $0.99. 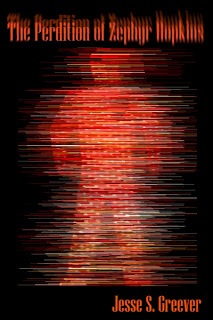 Zephyr Hopkins, cursed with that name since moments after his birth, inhaled until he felt his chest would burst. Vehicles of all shapes, sizes, and colors—and perhaps even creeds—whizzed through the busy intersection. Zephyr’s gaze drilled with meditative focus on the orange stick figure encased behind a wire mesh, warning anyone who might consider jaywalking with an incandescent glow. A single tear forced itself from the corner of his eye, and scalded as it trickled down his cheek, changing course every time it encountered another whisker.
Across the street, the “DON’T WALK” figure disappeared in deference to his next door neighbor: the cheery, backlit-by-white-light “WALK” figure, depicted mid-stride in a happy-go-lucky stroll. An impatient glut of humanity flowed around him, plunging him into the crosswalk. A few less-than-friendly nudges and a disgruntled “Hey buddy” attempted to pull him from his trance, but Zephyr Hopkins was astray in a turbulent whirlpool of echoes of the past few months.
…it’s nothing personal…
…come as quickly as you can…
…don’t be mad…
…lay it all out for her…
Wispy strands of thin, jet-black hair fell over his forehead and in front of his eyes. He brushed it away with a quivering hand as his right foot ventured a few inches forward.
Or a few feet.
Or a few miles.
It was becoming so difficult to tell.
The familiar chime that announced the end of the “WALK” signal blared its clarion call from all four corners of the intersection of Fifth and Main, jolting Zephyr back from his oddly peaceful oblivion and into his heartrending circumstances. He surveyed the scene in the span of a fraction of a second. All four directions of traffic halted while the all-way red light insured everyone was out of the intersection.
So many cars full of so many people. A mother fidgeted with her smart phone while tapping her fingers on the steering wheel, ignoring her gaggle of children with the deftness of an experienced soccer-mom. A middle-aged man in a sharp tan suit and expensive-looking sunglasses checked himself in his mirror before taking both hands off the wheel to smack some sense into an unruly patch of hair above his left ear. An early-twenty-something leaned over to kiss his girlfriend, perhaps lingering a bit longer than public propriety would normally dictate.

Zephyr peered across the sea of cubicles and saw Collin Nordstrom motioning in that hey-buddy-but-I’m-not-really-your-buddy method he had become so efficient at oozing. The general rule that a company’s best salesman usually makes the company’s worst sales manager was not wasted at Xoreon, manufacturer of the highest quality digital x-ray machines. Collin had managed to win Salesperson of the Year eight of the last nine years, and lost in 2008 for no other reason than four months of scattered absences while his wife battled breast cancer like some fierce hospital-smock-wearing warrior princess. Everyone had been happy to chip in and cover Collin’s territory, less because they liked Collin, but more because they adored his wife Carla.

When the position of National Sales Director became available, it was a foregone conclusion that Collin would be offered the position, and he would subsequently decline. Much to the amazement of the entire sales team, despite Collin’s protests that he would never join the management team, he snatched up the offer with lightning speed and assumed his new role in his new digs. He traded his humdrum cubicle for a real office with a real door that actually closed. He installed mini-blinds on the floor-to-ceiling windows on the interior wall of his office, and frequently kept them closed.

Zephyr stood up and acknowledged Collin with a nod. A fastidious note-taker, he grabbed his pen and legal pad. He slid his uncomfortable black office chair—carefully crafted in some impoverished Asian nation from particle board, low density foam, and scratchy tweed-like fabric—under his desk and strode deliberately toward Collin’s office.

Annual performance review time. Everyone knew it, and everyone expected to be called into Collin’s office for his inaugural round of reviews. For the most part, Collin and Zephyr had always been on cordial terms; however, since his promotion, tensions bubbled to the surface when Collin criticized Zephyr’s peculiar brand of fussiness over the minutest details. “Lighten up,” he’d say, forcing Zephyr to stifle an untoward retort.

Zephyr stepped over the threshold, and Collin motioned for him to take a seat. The strangely suggestive, curvaceous edge of the desk had an unnerving effect on Zephyr, forcing him to struggle to discover a position that would allow him to sit and write in relative comfort. After a few rounds of pushing and scooting and sliding and nudging, Zephyr found the sweet spot and readied himself for a slew of useless tips for improvement in the coming year.

Collin flashed a wan smile. “Zeph, would you mind closing the door?”

Irritated that he would have to repeat the comfort-seeking ritual again, he sighed sharply. He arose and pushed the door shut with no particular urgency. He returned to his seat and fidgeted until he could sit and write while sacrificing neither comfort nor efficiency.

“Zeph, I don’t think you’ll need to take notes during this meeting. It’s going to be pretty brief.”

Well, now that’s merciful. Maybe he’s finally realized if he just leaves me alone to do my job instead of offering his occasional vapid sales-motivation platitudes, next year will be even better than this year.

Zephyr sat back in his chair, distressed by the absence of activity for his hands. Deciding that folding them in his lap was the most reasonable placement, he interlocked his fingers loosely, locked eyes with Collin, and expended minimal effort to feign a warm smile.

Collin looked away and fixed his eyes on a blank spot on the wall. “I don’t really know how to tell you this. So, I’ll just come out and say it. I’m afraid your position here is no longer available.”

Within the deepest recesses of Zephyr’s mind, his internal time-keeper short-circuited. Milliseconds dragged on for hours, minutes for seconds, then seconds for years. An impossible feeling of slippage commandeered his senses as the room spun in sporadic, random jerks and tilts. He watched as Collin appeared to be praying, eyes closed tight enough to crinkle the crow’s feet that framed his eyes. However, when he watched Collin slowly lift his eyelids, he realized that everything was moving in extreme slow-motion, and he was merely catching the tail end of a blink.

After hours—or seconds or years, who knew?—time seemed to right itself and Zephyr’s jaw unlocked. Little better than a whisper, he managed to blurt out a few words.

“Well, as I’m sure you are aware, your performance has suffered a bit since you made the decision to take occasional leave to attend to your mother. I was very clear that I expected you to perform up to expectations in spite of those interruptions.”

Confusion twisted Zephyr’s features. “I’m not sure what you mean. I met my quota for the year. How is that not performing up to expectations?”

“While it is true that you met your quota, you were the only team member that didn’t exceed it by more than twenty percent. Obviously the market is booming, and simply performing to the minimum acceptable level is, as of right now, unacceptable.”

“That doesn’t make any sense.” His voice picked up a few decibels along the way and beads of sweat formed along Zephyr’s crooked hairline. “How can performing at an acceptable level be unacceptable? Isn’t that, by definition, acceptable?” Zephyr looked from side to side, half-expecting to see all of his co-workers hiding in the office, ready to burst out laughing at what he could only assume was a vicious, mean-spirited prank. “What’s going on here?”

“I’m sorry, but what’s done is done. You will be expected to have your desk cleaned out by the end of the day, although under the circumstances, I’d say sooner is better. Oh, and please turn in your corporate credit card to accounting. Jackie in HR will also have some paperwork for you.”

Zephyr shook his head, ramping up the velocity from purposeful movement to wild, chaotic oscillations. He broke free from the dizzying motion and snapped his head up. “Now wait a minute. You remember when Carla had cancer and you took all that time off? We all pitched in to help you. Don’t you remember that I won you the big account in The Research Triangle? How could you even think of doing this to me?”

“I recognize all that everyone did for me during that incredibly difficult time, but those were very unique circumstances. Caring for elderly parents is not something that qualifies, at least in my book, as a reason to take so much time off work.”

A special blend of hatred, vexation, and an overload of caffeine erupted into physical action. Zephyr charged across the desk, grabbed Collin’s tie, and yanked it forward. Immediately realizing he had made the treacherous march across the Rubicon, Zephyr resolved not to make this desperate situation a waste of time. “Now you listen here, you mealy-mouthed, sorry excuse for a human being. If we hadn’t helped you out during that time, you wouldn’t even be in the position to fire me. You better count your lucky stars that, one, I’m not a violent person, and two, I’m not vindictive, or right after I’d smashed your face into this desk I would pick up the phone and let Carla know about your ‘special friend’ in Detroit.”

Satisfied that he had not only sealed his fate in an air-tight tomb, but had also scared the living daylights out of his now former boss, he scrutinized Collin’s face for any hint of dread. The corners of Collin’s mouth rose with unhurried intention, waltzing towards his cheekbones. “If I didn’t know any better, I’d say you’re trying to somehow leverage that knowledge against me. Well, as it happens, I’ve got some bad news for you. I told Carla about Dayna over a year ago and we’re working through it. So, as I see it, you don’t have any cards left to play now, do you?”

Blood and rage surged through Zephyr’s veins and set his cheeks on fire. His fingernails dug into the palms of his hands, punching through the surface layers of skins and drawing tiny crescents of blood on the otherwise pale canvas. He stood statue-still for a few seconds, contemplating screaming, punching, kicking, and crying, but decided against all of the above. He straightened his back, unclenched his fists, composed himself, and opened the door to make a semi-graceful egress.

Everyone in the general office area took notice as Zephyr slammed the door behind him with force enough to rattle the windows of Collin’s office.


The Perdition of Zephyr Hopkins is now available at the following retailers for $0.99.
Posted by Unknown at 9:46 AM